"Rather than attack from the off, David Martin’s fascinating two-hander creeps up on the audience. Set in a therapist’s office, this harrowing piece of new writing explores the ramifications that child abuse has on a woman’s life. Lucy Elzik is outstanding as the Woman, playing a complex character with just the right amount of sensitivity and matter-of-factness.

Martin also stars in the piece as the Therapist, the man tasked with drawing out these painful memories. The two have a wonderful chemistry, helped by Martin’s zippy dialogue ...with a major twist in the final third.

Jacqs Graham’s direction is a strong-point too. A cluttered stage is a great analogy for the Woman’s state of mind, a stage that slowly gets uncluttered. A haunting soundscape looms over the production, adding to the unsettling ambience of this great show."

​What Our Audiences Thought

Wow!! Just wow!! We are so so grateful to all of our audience members for coming to see UnSpoken and taking the time to leave us a review. Thank you so much!

Steve Scothern: Powerful, intriguing, surprising and sometimes shocking. An acting masterclass with a potent theme that commands your attention long after the performance ends. Yes, it's good!

Gillian Flanagan: Bumped into the Author on the mile, he said it would be good, (as he wrote it and was the therapist too) and he wasn't wrong. Intimate performance, sensitive writing, superb acting, highly recommend this play.

Robert Aitken: Don’t hesitate to come and see this play.
You’ll laugh, cry and enjoy being taken on a rollercoaster of every emotion in between.
Clever script, minimalist yet effective set.
The two actors command attention and sympathy from the audience.
Small venue only helps the audience to feel even more drawn in to the action.
We were in the audience on Saturday after we were approached by the lovely lead actress on the royal mile. She took time to tell us about her play and we were so glad we came to show support - it was truly excellent.

Angela Perrett: This was a really powerful piece of theatre. Very strong, compelling performances from both actors. Don’t miss it

Julie Carter: Brilliantly performed and fast moving, very dark topic but carried out and delivered well. If you only have time to watch one piece of theatre whilst at The Fringe this is a must.

Emma Smart: This is a play with soul. Beautifully written, directed and performed, it will grab you from the start and take you on an emotional rollercoaster of a journey full of atmosphere and intrigue. Difficult subjects are covered but with humour and sensitivity. We thoroughly enjoyed it - well done to everyone involved. Definitely one to see.

APT: One of the few 'serious' dramas we saw at the Fringe and it was very well done. Strong performances, good script. I'd love to see this group again.

Nathalie Baldwin: A lovely piece of theatre that deserves to be seen by many! The writing is impressive. It's complex, wonderfully ironic and holds so much subtext. Which in turn gives the actors so much to play around with. Thankfully the actors do just that! They're charming and real and it's just lovely to see them bring themselves to the role. The director deserves a round of applause also, since she/he has clearly thought about how one can position the actor, the lighting and sound to create a very "unspoken" tone. Yes, it's a dark subject matter but they all handle it with a lot of talent. Bravo.

Edward Green: A masterclass by two brilliant actors bringing a dark subject hidden deep in the mind out before the audience in a gripping interaction of both characters pasts. An exposition of sharp dialogue and physical theatre that was spell binding. A must see!!

Kevin Moss: Another Superb production by Soft Sod. Great jumping on point for anyone keen to learn more about what Mental illness is really like.

Chris Loveless: We weren't sure what to expect as I try not to read too much beforehand. Very good performance and an intense, thought provoking experience. It's great to see something that is serious in the usual mix (for us at least) of comedy and improv/street performance. The venue is also interesting and it's in a part of town we haven't seen before with good food and drink areas set up specially for the festival. All in all very much recommended, give it a go!

Sarah Phoenix: A must see, is the challenging and psychologically thought provoking play UnSpoken, at C Venues,George Street. I love the Fringe.

Lisa Eversden: Wasn't sure what to expect and absolutely loved it. Really enjoyed Fragile Man last year and the next instalment of thought provoking drama from Softsod did not disappoint. Beautiful, engaging and perfectly acted by the cast. I highly recommend it.. it's a must see show :)

Merav: Really fascinating and gripping! Unspoken will keep you at the edge of your seat the entire time. Not one word or jesture out of place. Masterfully acted and delightfully surprising. Highly recommend! Don’t miss it.

Joanne Jones: I was blown away by this stunning ..energetic performance today . From start to finish I was completely entertained ..music fab..brilliant talent . Great to raise awareness on such important /tender issues ..an absolute must see!!

Stephen Graham: I saw this show in Bath and it's on my list to see when I visit the Fringe next weekend. It's an intriguing, anguished, high-energy encounter between a young woman and her therapist, taking place over the course of her session... or does it?!


In the wrong hands you might expect a pair of talking heads, but Softsod have tackled this with the same level of energy, innovation and physical imagination they brought to their Fringe show last year ("Fragile Man"). I found it really gripping, but it isn't afraid to show a lyrical side, either. Actually writing this, I'm looking forward to seeing it again!

As funeral bells chime, a mysterious woman whispers a terrible secret to a grieving wife. Years later, now in therapy, the woman pieces together the jigsaw of her life, the damning relationship with her father and the disturbing truth behind that secret whisper.

Written by David Martin, directed by Jacqs Graham and featuring Lucy Elzik and David Martin, UnSpoken is a dark and thought-provoking tale of survival against the odds. It raises the profile of childhood abuse, the challenges of mental and emotional turmoil some of us must face and our very human search for truth, acceptance and resolution.

​This newly written drama, with original evocative soundscape, will appeal to those seeking intelligent, beautifully crafted theatre. It hinges around one of the unseen minor characters from our first Edinburgh Festival Fringe drama Fragile Man; a woman who fleetingly appears as part of a dimly recalled childhood memory and whispers a terrible secret to a recently bereaved wife. UnSpoken now gives this mysterious woman the opportunity to tell her story. In a physical, metaphorical and often lyrical portrayal of a woman on the edge, the enigmatic, but deeply troubled woman, reveals her struggle with trust and love. In an exchange with her 'therapist' that darts rapidly between reality and symbolic projection, the woman crosses the boundary of her own repressed memories and uncovers the unnerving truth behind what she said to the grieving wife that day and more importantly, why. 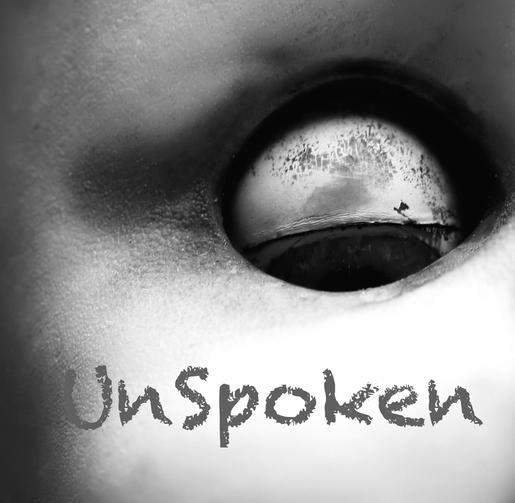